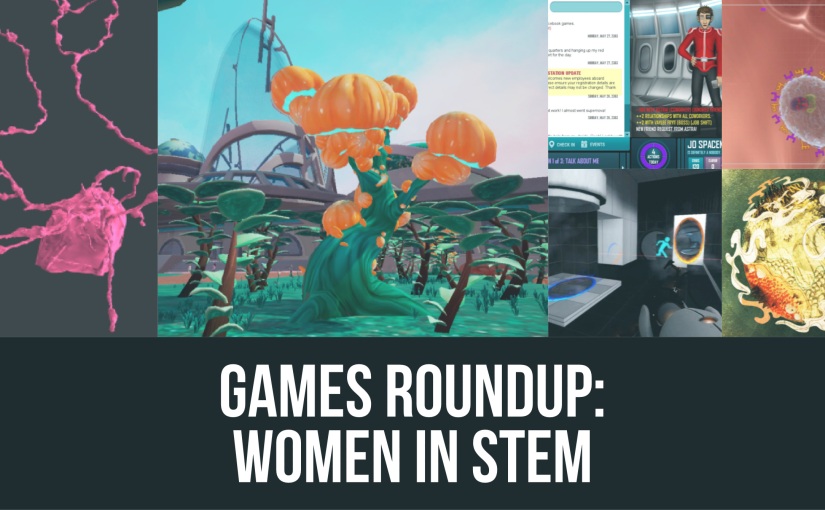 As part of my work at the Woodrow Wilson Center’s Serious Games Initiative, I will be writing blog posts about serious/impact games. These write-ups will get cross posted here with a link to the original  on the Wilson Website.

This blog post was written in collaboration with Evaniya Shakya.

In our past rounds ups, we have focused on highlighting games that educate around a particular theme, from science to history. For this edition, we wanted to flip the script and look behind the screen to commemorate Women’s History Month. STEM fields, particularly in disciplines like computer science, are often male dominated. We wanted to add to the narrative of Women’s History Month by highlighting women who are using games and play to educate and revolutionize the STEM field. Here are just examples of six women who have used their backgrounds and research in STEM fields to inform their work in games.

Amy Robinson-Sterling is the Executive Director for EyeWire and one of Forbes’ 2015 30 Under 30 in games. She has done crowd-sourced health programs that were implemented in Brazil, crafted the first neuroscience (science that studies the structures and activities of the nervous system and brain) virtual reality experience, and founded the TEDx Music Project. At her company EyeWire, Robinson-Sterling has gamified mapping the human brain, allowing thousands of players around the world to map neurons so that “we may better understand ourselves.” Robinson-Sterling, in partnership with the National Institute of Health, has taken some of the user identified retinal neurons and curated 3D models that people can 3D print.  Eyewire is available to play online for free, and is recommended for grades 9+.

Kim Swift is a video game designer, currently working at Electronic Arts (EA), and has previously been featured by Fortune as one of the “30 under 30” for 2012 most influential figures in the video game industry. After showing their game at Digi-Pen’s annual student showcase, Swift and her teammates were recruited by Valve when their game caught the eye of the company’s CEO Gabe Newell. That student game would later become Portal, and Swift moved on to create other hit titles like Left 4 Dead and Left 4 Dead 2. Portal has been used to teach physics classes for grades 9-12, allowing students to get hands on experience gravity, velocity and oscillation. Portal challenges the player to use creative game mechanics, puzzle solving, and a fundamental knowledge of physics like principles of Newtonian mechanics and conservation of mass. Portal 2 has also been used in research to test fluid intelligence, or the intelligence to solve new problems, by using the puzzle creator within the game.

Lindsey Tropf is the CEO at Immersed Games. She founded the tech-startup company because she realized the importance of providing an online gaming platform for education. Immersed Games has developed the game Tyto Ecology that teaches players about the tiers and relationships in an ecosystem by letting them create their own. This is the first standalone game part of the larger, multiplayer game of Tyto Online, where students complete quests to build a life on a new planet after the destruction of Earth. “I decided to make this because of my experiences having been a gamer and getting really deep into learning strategies and lore about games, and realizing in the education field that educational games didn’t really had that sort of depth.  I wanted to make students passionately analyze data not just to get better at a boss in World of Warcraft, but to also figure out how to build an ecosystem better or solve other applied science problems.” Tropf told us in an email interview.

Dr. Melanie Stegman is a biochemist who studied the molecular causes of brain cancer, birth defects and Tuberculosis. She is also a self-taught game designer product manager. Dr. Stegman is the owner and Creative Director of Molecular Jig Games, a company that creates games to teach a wide audience about concepts in the molecular world. She also runs the Science Games Center website which reviews science and math games that assist in education and learning for students K-12 and University. Prior to starting Molecular Jig Game, she conducted research on learning and confidence gain in players of the game Immune Attack. She found that players learned and were more confident in their ability to understand cell biology than non players. She created a game Immune Defense based on that research. Players navigate a mirobot through the the bloodstream to save the infected patient while learning about microbiology. Other games currently being developed by Molecular Jig Games are Immune Defense and NanoCrasher that educate gamers on topics like immunity, diabetes and nutrition.

Dr. Mitu Khandaker is an assistant professor at NYU’s Game Center and CCO of Spirit AI. She is a former STEM Ambassador for STEM Learning, a UK initiative to bring STEM education to schools, as well as a Video Game Ambassador. She is best known for the game Redshirt, where players do their duties on board a space station as they engage and analyze social media. This let’s players analyze the soft sciences of sociology and communication. On the origins of Redshirt, Dr. Khandaker says “It’s hard to pinpoint exactly when the idea for Redshirt formed, but I started thinking about how much about ourselves and each other we define through social media, and because I’d been interested in social simulation games (I absolutely loved The Sims!) I wanted to make a game which explored that.” The game has garnered wide media attention, earning Dr. Khandaker a British Academy Film Award (BAFTA) as a Breakthrough Brit. She continues to advocate for STEM, gender equality, and social gaming, and game controller design through TED talks and conference panels.

With titles like Journey and The Sims 2 under her belt, Robin Hunicke is now the producer and CEO of Funomena. There she has been one of the pioneers for virtual reality (VR) with Intel and Oculus Rift as she crafted games meant to promote empathy and understanding in players. Hunicke was a member of the Computer Science for All Initiative, where she gathered funding to aid game developers of undeserved communities make VR games. In an interview with Vice she says “In the 1970s we had Sesame Street, where concepts of race were explored for the first time in media. I want the grant to allow VR and video games to push the same sort of forward-thinking agenda to children. Video games should heal and make us relate to one another, that’s the next step with VR.”  Her company was also chosen by the National Science Foundation (NSF) and researchers at UC Davis to develop the game Terra. Meant to promote fitness to kids, Terra equipped kids with a fitbit pedometer so they could track their activity. They would then use their pedometer data as a class to help terraform and restore and alien planet. You can learn more about the development of the game from a blog post here.

Advice on Leveling Up

Wanting to learn more about the role of STEM to their approach to gaming, as well as any advice to young women on how to get involved in the gaming industry, we approached all the women featured in this article for comment. Below is some of the advice that Lindsey Tropf and Dr. Melanie Stegman were able to offer.

“Play video games!  Seriously — research shows that playing action games can improve your spatial skills. These are the skills that let you rotate mental objects in your mind and things like that.  These are actually important in high level math and physics, and playing games builds these skills that then does help with building your STEM skills.  There are other ways, of course, but if you can play a video game vs. having to attend a special training on spatial skill development, I’d much rather play the video game.” Tropf writes. She continues, “Also, please do projects and build your skills independently. There’s an often-commented-on confidence gap (not a skill gap!) between women and men, which means men are more likely to volunteer to be leaders or apply to positions even if they don’t meet all the qualifications. Women tend to hold back more — but that means you’re less likely to get really important experiences.”

In a similar vein, Dr. Melanie Stegman talked about the need for tenacity. “The one thing I wish I’d known as a 13 year old girl: some people act like they know stuff when they don’t. The truth is that many people will act like they know more about games, about tech, about coding than they do. So never let yourself feel intimidated!” She added, “You will have difficulties. You will come across something in your project that you need to do but you don’t understand. Something in the textbook of you favorite class will confuse you. Any set back can make you feel unprepared and inadequate,” Stegman told us, “Do not decide that your background or personality or anything is the reason for the set back. Instead just examine what it is that you don’t know, read about it, get help if you need it and count this thing as another triumph.”

And those are our featured ladies. Do you know of any other women making STEM games? Send them to us via @WilsonSTIP on Twitter!

UPDATE: A previous version of this post indicate that Dr. Stegman was the developer of Immune Attack. This has been corrected to identify her as having conducted research on the game.