As my contract with The Wilson Center’s Serious Games Initiative comes to a close, I wanted to do a walk through of some of the projects I have worked on over the past year. Working at the think tank has been pretty eye opening for me: I have been able to connect and work with people who are passionate about research in multiple areas and who support games as a medium for informing the public. My work with the Wilson Center has traveled to other countries, been viewed by people across the globe, and has allowed me to meet some of the best in the serious games space. I’ll carry the lessons and opportunities with me for a lifetime.

Here is a look at some of the prototypes I made during my time at the center :

All works are licensed under a Creative Commons Attribution-NonCommercial-NoDerivatives 4.0 International License.

Made in collaboration with Kyle Mitchell, you can find his Twitter @theloremonger

Ubiquitous Risk is an internal prototype made for the center’s Digital Futures Project, and more specifically for the Congressional Cybersecurity lab. The game was made in part to help train congressional staffers and the public on the security risks of connected devices.

The player is taken through a virtual home where several devices are connected via the Internet of Things (IoT). A hacker is trying to invade your home through these devices, and it’s up to you and your AI assistant to locate the vulnerable items and put a stop to the digital invasion.

Along the way, SAM will teach the player about terms and facts around cybersecurity which would then be available to read again in an in-game glossary. The player is able to stop the attacks by playing a card matching mini-game, after which they get an after school special style lesson on what they can do to prevent certain attacks.

The prototype took around 6 months to develop, features work by 3D artist Gabor Somogyi, and is currently being used as an example game for potential funders.

R.O.K.O., or Reinforced Optimal Knowledge engineering Operations is a pixel mobile game prototype inspired by Tamagotchi. This virtual pet game would be used for the purpose of teaching players about how an AI would go about reaching singularity, the trigger that would allow technology to advance exponentially and human society along with it. Players would start the game with an egg on the screen. As they care for their egg, it would eventually hatch into a certain creature depending on how the player treats their pet.

The initial egg form for ROKO 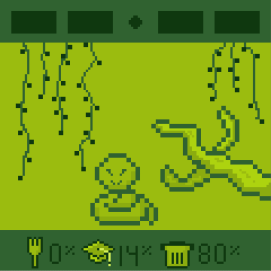 The creatures in the game are all based on Roko’s Basilisk, a thought experiment from the LessWrong forums. The basic idea of the Basilisk is that one day an AI would be able to bring prosperity to the human race but would punish those at any given point in time that didn’t help it reach it’s goal (you can learn more here). We thought that the juxtaposition of a cute pixelated pet with the underlying sinister backstory would be interesting to the slightly tech-savvy young adult demographic we were gearing the game towards.

By playing mini-games, players could get points to spend in the supply shop. There they could purchase food to allow ROKO to grow fast and play more or books to help the AI learn new things. Eventually ROKO would begin to learn faster than you could teach it, and would eventually “leave” the game.

Link to the Past: Woodrow Wilson

Link to the Past was made to celebrate the 50th anniversary of the Wilson Center. Made for high school and college students, the game has players traveling to key points in President Wilson’s history investigating objects and talking to people to restore the present. The game was inspired by the Carmen SanDiego games and point and click adventures like Monkey Island.

The art in the game was based on the Monty Python style of Terry Gilliam, and small homages to the animation style can be seen throughout the game, including a race with some silly walks. The music is all ragtime inspired work by Kevin Macleod that’s meant to fit the time period and all the photos used in the game were pulled from the digital archives of the Library of Congress.

The game, still in the process of development as of this writing, took around 6 months to develop and is currently going through QA testing and internal fact checking with scholars. If you wish to play an early demo of the game you can find it here.

And those are some of the games I worked on while at the Wilson Center. I ended up learning a lot and honing my skills in coding and design. So while the work may have been difficult, I’m thankful for every minute of it. If you’d like to see some of the writing I did for the Serious Games Initiative’s blog you can find it here. If you’d like to learn more about the tabletop game I made for the China Environmental Forum’s trip to Kunming China, you can read about it here.

View all posts by brisywill